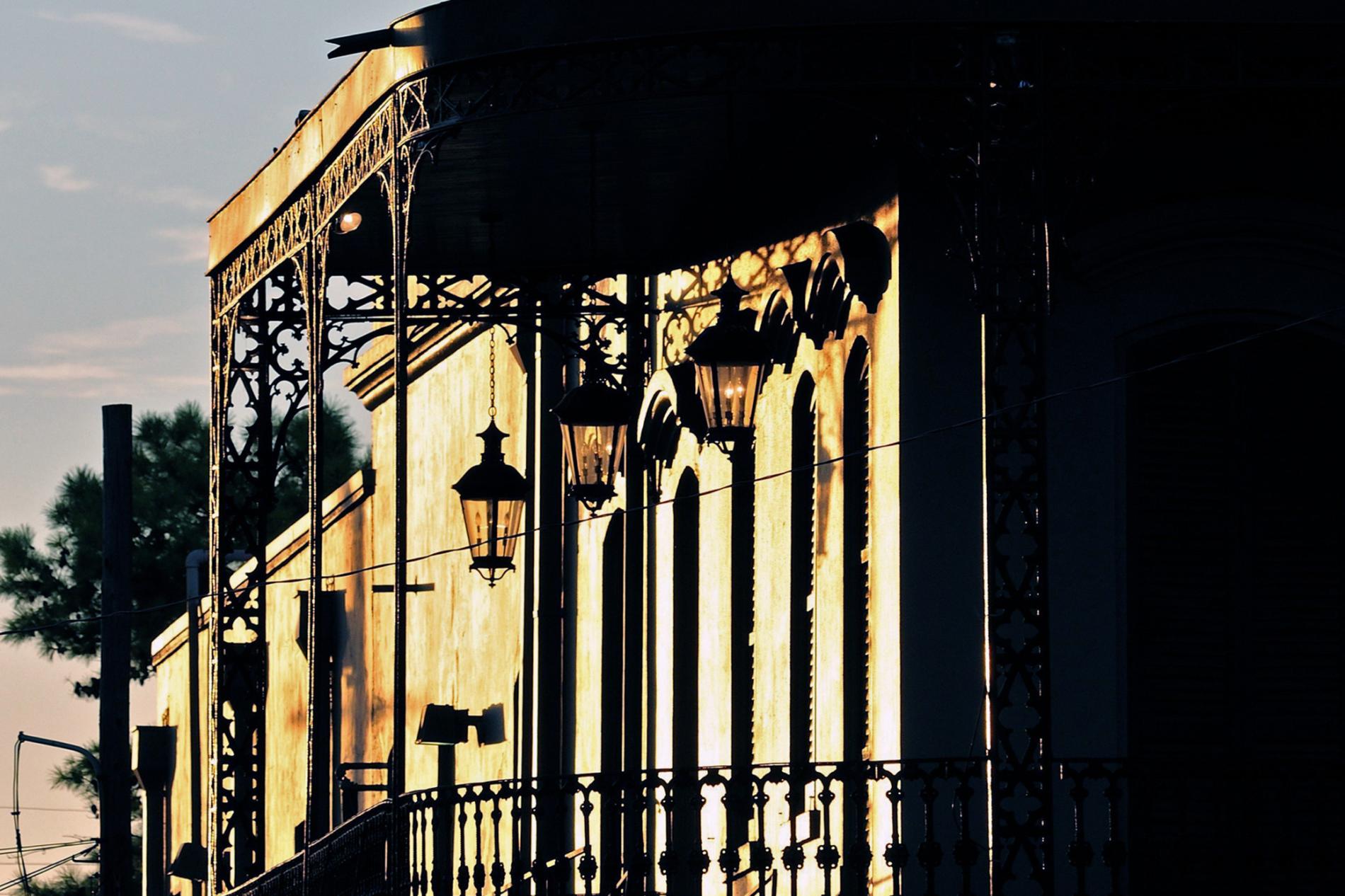 ALTHOUGH COVID-19 RESTRICTIONS are depriving New Orleans of its lusty and lively Mardi Gras traditions, the city still plans to celebrate Fat Tuesday (February 16)—but safely, to avoid becoming a superspreader event as it did in 2020.

Instead of parades full of costumed, bead-throwing revelers rolling down St. Charles Avenue and other thoroughfares, citizens are transforming their houses into colorful—if immobile—parade floats to replace those sidelined this year.

Yet such homes aren’t just a creative outlet during a pandemic. New Orleanians are discovering their properties, many built in the 18th to early 20th centuries, are equipped with traditional features useful in keeping the virus at bay. Rambling porches serve as open-air living rooms and platforms on which to safely interact with neighbors. Private courtyards and public “neutral grounds” permit additional socially distanced interaction and exercise.

In the battle against coronavirus, other cities with similar historic housing stock can look to how New Orleans uses these architectural elements to keep things cool and promote outdoor living.

Pandemics aren’t new to New Orleans. In the 19th century, its inhabitants endured successive waves of yellow fever, most notably in 1853, with the last outbreak in 1905. Cholera and the 1918 Spanish Flu also ravaged the city.

But it was climate, not disease, that really shaped to the city’s look and feel. With New Orleans’ subtropical climate, summers can be both hot and humid, with heat waves starting as early as Jazz Fest (traditionally the first week of May) and going as late as October. Before air conditioning, living here meant incorporating building features to keep one’s cool.

Those designs have proved useful once again during the city’s current health crisis.

(New Orleans culture marches on despite the pandemic.)

“The culture of New Orleans is one that’s lived outside. [Here] it’s not normal to sit inside,” says resident Ariana Ganak, a small business manager who twice a week works out with five friends in front of her Carrollton neighborhood home. “We’ve been socializing like that forever, so the pandemic’s not all that different. Drive down any street, you’ll see people sitting on their front porch and on their stoop.”

For travelers, examples of such architectural features are abundant, preserved within 14 historic neighborhoods, 24 state cultural districts, and 26 National Historic Landmark designations. New Orleans is an example of how traditional solutions to promote comfort and health can work in the 21st century, as well.

The pleasures of porches

“Outdoor living with sofas and firepits has been a national trend, but we’ve been doing that in New Orleans for more than 200 years,” says Jennifer Avegno, a lifelong resident, whose father helped restore many historic buildings.

Before her appointment as the head of the New Orleans Health Department, the emergency room physician focused on helping New Orleans’ disadvantaged communities. Avegno is now in charge of the city’s public health response to COVID-19. She and her family live in the city in a restored 1883 shotgun house. Their porch is a place to share meals, take a phone call, and escape from crowded rooms.

“Walking around my neighborhood you see a lot of people on their porch on their laptops.,” says Avegno. “[They’re] clearly working, but working outside.”

In addition, porches can ease the isolation of social distancing by becoming a platform to greet the neighbors and conduct conversations from a safe but comfortable distance.

For some residents, they’ve also become a stage. In Algiers Point, a historic neighborhood on the west bank of the Mississippi River, they even offer a novel platform on which residents can perform some of the city’s legendary jazz music for residents and fans.

“[Porches] are a way of keeping safe and connecting with one another,” says local jazz singer Anaïs St. John. “You let the outside world know who you are and that you’re accessible. It’s a very sophisticated thing to do.”

A former mezzo-soprano with the New Orleans Opera and a music teacher at the Trinity Episcopal School, St. John has organized more than 30 concerts since the pandemic began. The events have featured local musicians who accompany her as she covers singers such as Eartha Kitt, Nina Simone, and Dolly Parton, from the porch of her blue and purple-painted “camelback,” an architectural style featuring a second story on the back of a shotgun house.

“My neighbors come by and my friends. Everybody is socially distanced and wearing masks,” she says. “I [sang] Dolly Parton, and there were 65 people assembled in the street.” Some even arrived dressed as the Nashville star. “That is a very New Orleans thing,” St. John says. “We just love costuming and any occasion to dress up.”

Public buildings, such as the Columns, also make use of outdoor porches. Operating in an 1890s mansion on St. Charles Avenue north of the Garden District, the longtime hotel is famed for its spacious two-story porch, fringed by philodendrons and banana trees. It’s not just for guests; it’s a sought-after space for local birthdays, engagements, and graduations.

“The porch feels like a step back in time,” says local journalist and editor Sue Strachan, who is working on a book about the city’s cocktail culture. “Trying to quantify it is like putting lightning in a bottle.”

Outside of the French Quarter, much of New Orleans’ street layout owes its design to customs dating to medieval France. The French tradition of insuring all land owners had access to river frontage led to a series of long, narrow plantations along the Mississippi in that country’s Louisiana colony, says Lake Douglas, professor at the Robert Reich School of Landscape Architecture, Louisiana State University.

As acreage closest to a burgeoning New Orleans became neighborhoods in the 19th century, developers would leave the old boundary lines but drain the former agricultural land along the “neutral ground” between two adjoining properties. These ditches, or canals, carried the water to “back of town,” the city’s nickname for the area of swamps and low-lying land behind the higher ground along the river.

(Here’s where to see amazing architecture from your car window.)

By the 1880s these open-air waterways were being enclosed, buried and grassed over to combat disease such as yellow fever, and to upgrade the city’s infrastructure. The wide green medians, still called neutral grounds in local parlance, gave avenues such as Elysian Fields, Louisiana, and Napoleon their stately appearance. In the 21st century, these tree-shaded greenways—including the 2.6-mile Lafitte Greenway, formerly the Carondelet Canal—have become places for New Orleanians to run, walk, and bike.

“I walk the Napoleon Avenue neutral ground every day,” says Avegno. She often goes on bike rides in Audubon Park, which was designed by John Charles Olmstead in 1871 and which hosted a world’s fair, the World Cotton Centennial, in 1884.

But perhaps the most iconic New Orleans outdoor spaces are its private courtyards. “People don’t realize that when you look at a narrow New Orleans house, there could be a gorgeous courtyard out back that you never knew existed,” Avegno says.

Often hidden behind jasmine-covered brick walls and featuring ferns, flowerpots, and fountains, courtyards impart a romantic air to French Quarter restaurants. The historic reality was neither dreamy nor aromatic. Part of the 18th-century tradition of performing a household’s dirtiest chores outside, Quarter courtyards were places where kettles bubbled, fires smoked, and animals defecated.

“[Courtyards] were left open for utility and operations of the house, laundry, cooking, or stables,” says Douglas. “It’s only in the 20th century, when there was a move to preserve the French Quarter, that courtyards [went] from places of utility to places of desire and relaxation.”

Today the resiliency of New Orleans’ outdoor spaces both private and public continues to offer a respite for both locked-down residents and visitors. The city has survived floods and hurricanes, fire and fever, without bringing the party to a halt. This year may be quieter, but New Orleans, gearing up its vaccination program, is looking ahead.

Emirates:Today marks 11 years since the official opening of Burj Khalifa, the world’s tallest...