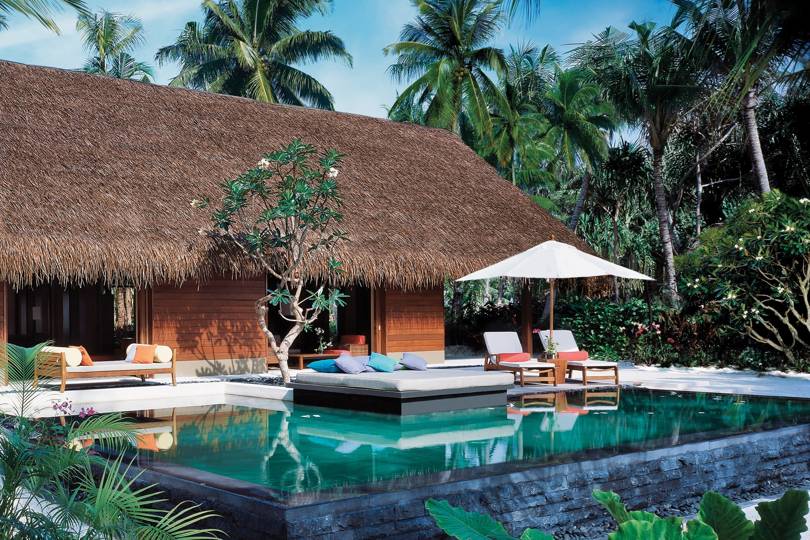 Best for a raft of activites

The sugar-white beach is exquisite, the pancake-flat sea bluer than blue; indeed, everything seems all so Indian Ocean perfect it barely feels real. But children will find the wild, carefree environment exhilarating: they’ll love cycling around the sandy paths under palm trees, and when more organised activities are needed there’s plenty of choice. The Little Turtle Club for four- to 12-year-olds is a wonder-world where they can feed baby clownfish, spot lizards, go on wishing-tree walks and get wet in all manner of ways. For older children, highs include diving lessons and wind-surfing, and boat trips to help count manta rays. There’s also a new programme, ‘Mission: Landaa Giraavaru’, an immersive adventure into the workings of the island, good for moody teens – the 14 mission levels will help develop skills from reporting to behind-the-scenes investigation and even bed-making. Other topics include energy conservation, endangered creatures and origami. And while everyone else is keeping busy, it’s worth knowing that the overwater spa is one of the most holistic and spiritual anywhere, with chakra-healing and Ayurvedic rituals delivered by staff plucked from Kerala. By Daisy Finer

Turquoise Holidays (+44 1494 678400; www.turquoiseholidays.co.uk) offers seven nights for a family of four in a Beach Bungalow with pool from £6,899 half-board, including flights with Qatar Airways and seaplane transfers

At 10 years old this is practically a veteran in the atolls, yet life here is as high octane as ever. Over Christmas and New Year Reethi Rah is basically a members’ club, with villas booked over a year in advance. Even regulars who have been visiting devotedly at Easter and over all three half terms still can’t get in. Families come with other families, grandparents bring grandchildren, three, sometimes four generations book adjoining villas, taking over one of the 12 beaches for themselves. It’s the hottest ticket. Parents think nothing of demolishing a magnum of Domaine Ott over lunch while their children bounce between the two volleyball pitches, tennis courts, the football pitch for guests vs staff matches, the pottery school for crafts and clay work, an artist’s studio for painting classes and a kids’ club jam-packed with excitement. Here is an entire, enormous island for them to free-wheel around, pedalling over mini bridges, past giant chess sets, cartwheeling in and out of the family pool, climbing and sliding on the sea inflatables and kayaking in the see-through canoes. Yet somehow One&Only has brilliantly married this family-friendly vibe with something ultra smart and glamorous. By Issy Von Simson

Best for picking up new skills

This relative newcomer is a real asset to the smart COMO brand. Its sister hotel in the Maldives is popular with couples and this one is aimed at the next stage: parenting. At the kids’ club, four- to 12-year-olds can grow crystals, fold palm leaves into parrots and learn Dhivehi (well, a few words anyway). But they’re just as likely go hunting for geckos or shark spotting, in keeping with COMO’s new ‘Play’ philosophy, which encourages children to take charge. It’s all about boosting confidence. For teens, there are plenty of watersports and desert-island hijinks plus getting down with dad at family yoga sessions if they (or you) are up for it. With shady gardens and plunge pools, and just a few steps from the sand, the beach villas are best for families. There’s a natural, understated vibe throughout, and children won’t eat this healthily anywhere in the archipelago: coconut, cinnamon and almond porridge for breakfast, lentil cakes with crushed avocado for tea. But really the joy of Maalifushi lies in its sensational spa, where parents are likely to disappear and emerge with a much higher patience threshold. Which let’s face it, means a marvellously relaxing time for everyone. By Leo Bear

The original ‘no news, no shoes’ Maldivian holiday was dreamt up by owners Sonu and Eva Shivdasani (him a former Etonian, her an ex-Vogue cover star) long before anyone else thought of barefoot luxury. But this place is also brilliant at keeping everyone happy on what is essentially a 100-acre fantasy family home with a jungle cinema and observatory where kids can spy galaxies far, far away with Ali Shameem, the only certified astronomer in the country. There’s also a turtle-spotting beach and an ice-cream parlour (Eva’s cheesecake flavour is devilishly good) and a treetop, Swiss Family Robinson-style restaurant reached by a wobbly rope bridge. The latest addition is The Den, the biggest children’s zone in the Indian Ocean. Entered through a tunnel, and kitted out with clocks and treasure maps, it hides an exhaustive list of fabulous playthings: a pirate ship, jungle zip-line, water slide, DJ room and hands-on kitchen. For all Soneva Fushi’s thrills, it can also be a soothing balm. By Mike MacEacheran

The clever PER AQUUM group has clocked that the honeymooners at Huvafen Fushi may want to return to the Maldives with some additions to their party. That’s where sister hotel Niyama comes in. Staff smile at sticky fingers, scoop up tantrummy toddlers and debate football teams with teens. The new island, Play, has at its heart a gleaming kids’ club, run by an unflappable Scott Dunn-trained team. With circus-top-themed rooms, a marathon of activities, the softest sand-floored playground and a water park, it’s a spirited hideaway for children, a refuge from the equatorial sun. For parents of smaller ones, the fact that the club takes kids from 12 months old is worth ordering another gin and tonic for. For those with tech-obsessed tweens, there’s a separate games zone with Xboxes, computers and an awesome pair of simulator rooms: one for cinema screenings and one with kit for golf, shooting and goal-scoring practice. And, of course, there are the beaches, the snorkelling, banana boats and dhoni trips. There’s not a chance in hell anyone will get bored. By Issy Von Simson

Archaeologists Find Evidence That Stonehenge Was First Erected in Wales

Greek hotel among the best in the world with jacuzzi (video)