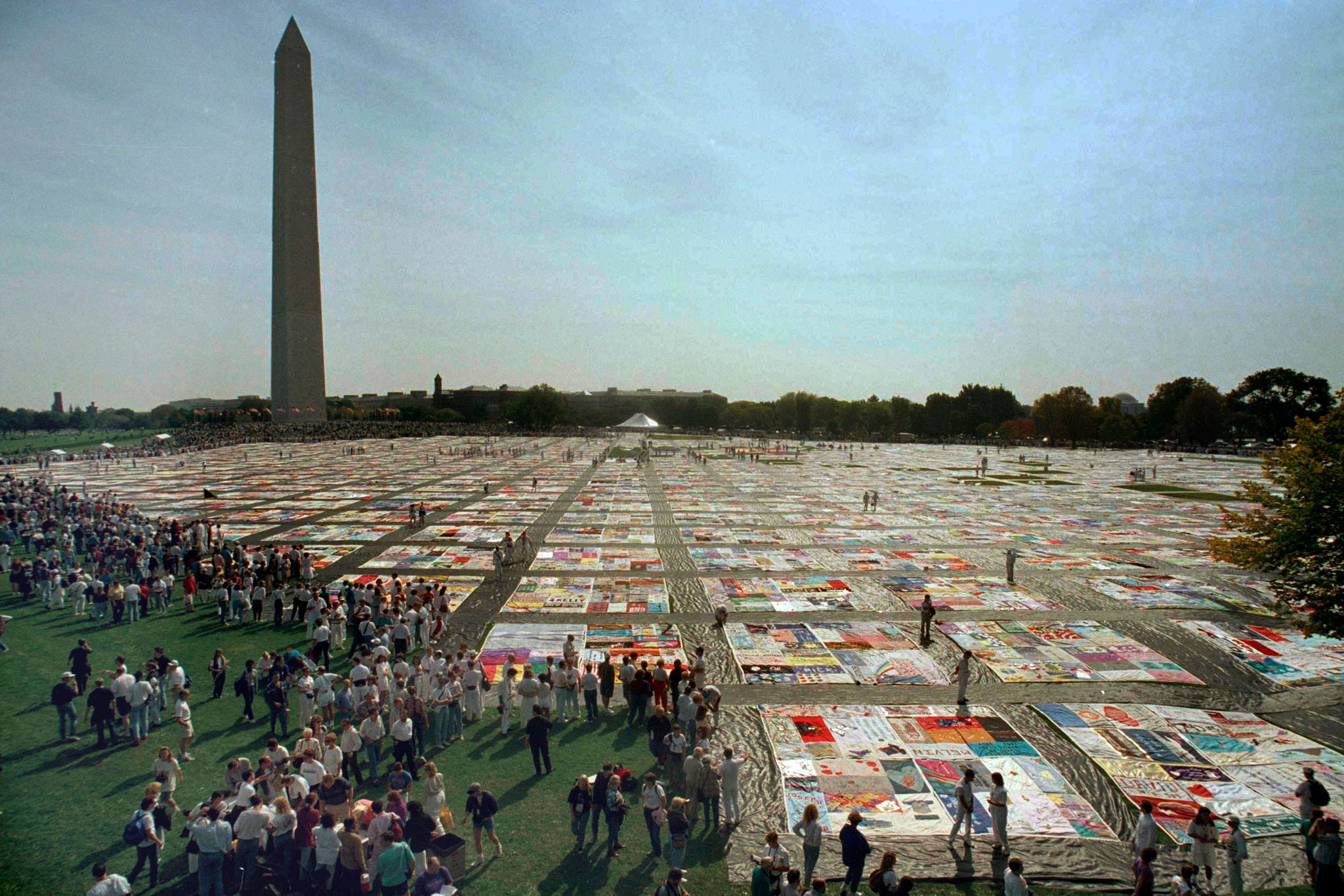 “LOOK AT A single flag,” artist Suzanne Brennan Firstenberg asks visitors to her art installation in Washington, D.C., a field with more than 248,000 white flags rippling in the breeze—one for each person who has died from COVID-19 in America.

“Now conjure up a story. Think of it as a school teacher who just lost her life,” Firstenberg says. She paints a picture of all those who would be stricken by the teacher’s death: her family, students, neighbors, co-workers, and the medical professionals who tried to save her. “Try to hold all that grief—and then look up and multiply,” she says, referring to the tens of thousands of flags before them.

The United States has now lost more than 250,000 people to COVID-19, although the true number could be much higher due to missed diagnoses, indirectly related deaths, and other classification issues. As the death toll becomes increasingly difficult to comprehend, people across the country, including artists like Firstenberg, are doing what they can to humanize the statistics and create spaces for mourning. (Here’s where COVID-19 cases are increasing and decreasing.)

Since her exhibition opened on October 23, Firstenberg and a group of volunteers have planted roughly a thousand small surveyor flags daily to keep up with the rising number of deaths. Today, the banners fill the three-and-a-half-acre field across the street from Robert F. Kennedy Memorial Stadium and are now spilling over into nearby medians. Firstenberg has ordered nearly 20,000 more flags in order to have enough by November 30, when the exhibit closes.

“People needed a place to come. Even if they couldn’t come here physically, they needed an emotional place to understand that their loved one was acknowledged,” she explains. “That’s what this art exhibition is all about. It is trying to have us understand that we really are in the midst of the greatest American tragedy most of us have had in our lifetimes.”

Calvin Washington discovered the project weeks ago while on his way to work for the city’s Department of General Services. Nearly every day since he has stopped by to plant a handful of flags and pray for those who have died, including some of his military friends.

“This is my way of saying, ‘We miss you. We are still going to live on, but you’re not forgotten.’ That’s why I plant flags every day,” he says. “I saw two tours in Iraq. But look at this. This is like a combat zone. This is a lot of deaths.”

On the west side of the field, a billboard announces the title of the art installation, “In America, How could this happen…,” along with the current death toll. A small patch of 25 flags sits to the right of the billboard: one for each person who died from COVID-19 in New Zealand, widely praised for stanching the spread of the virus by adopting a strict lockdown early in the pandemic. To the left stands 1,675 flags: the number of Americans who would have died if the country had adopted New Zealand’s approach, adjusting for population differences.

“They wore their masks, they did their social distancing, they did their quarantining,” Firstenberg says of New Zealanders. “They did it right because they respected each other enough to do it for others, if not for themselves.” (To end this pandemic, we must trust science.)

Memorials across the country

Projects like Firstenberg’s have been happening across the country since the spring. Throughout April, a Vietnam veteran in California played “Taps” at sunset to honor those who died each day. In May, people from around the country read the names of COVID-19 victims on a YouTube livestream for 24 hours straight. In August, the city of Detroit created a memorial drive lined with nearly 900 photos of the 1,500 Detroit residents lost to the virus since the pandemic began.

In Sherman Oaks, California, 13-year-old Madeleine Fugate looked to the AIDS Memorial Quilt for inspiration when completing a COVID-19 community action project for her history class final. With over 48,000 panels, the 35-year-old folk art piece honors more than 100,000 individuals who died due to complications from AIDS.

“When I was trying to figure out what I was going to do, my mom told me how she had worked on the AIDS quilt. Because she had lost someone, the AIDS quilt helped her heal and accept that he was gone. And I wanted that too,” Fugate says.

Inspired by the AIDS Memorial Quilt, 13-year-old Madeleine Fugate is working on a quilt to remember COVID-19 victims. She received this square in honor of Anna Carter, who was 13 years old when she died from the virus. “Anna was a dancer and loved acting. She left behind her…

Word got around that Fugate was looking for quilt squares in mid-May. To date she’s received more than a hundred eight-by-eight-inch pieces of fabric dedicated to people who have died from COVID-19. But one has been weighing on her mind: a simple white square with a photo transfer of a young girl. It’s from a woman who wanted to memorialize her 13-year-old daughter, Anna.

“I’m 13 and a lot of people I know are 13. When I hear about someone who’s my age who has died from a virus, it’s really sad. It’s also kind of a wakeup call that everyone can catch the virus,” she says. “It’s really a beautiful square, and she seems like she had a really happy life.”

When it reopens, the California Science Center plans to display one of Fugate’s panels for at least a year. Eventually Fugate hopes to gather one square from every person who has died from COVID-19 and then share the quilt around the world.

“If we forget about all these people that have died, it’s like we’re losing a little bit of humanity,” she says. “You really understand, when you see the squares and get to hold them in your hands, how much these people meant to the people sending the squares.”

“There’s a lot of unreconciled grief and pain out there,” says Randy Hollerith, dean of Washington National Cathedral in D.C.

Since COVID-19 has prevented families from gathering for traditional funerals and church services, the National Cathedral has created other opportunities for people to grieve. Every Saturday the church holds a virtual service where clergy members read 70 to 150 names of those who have died from the virus. On average 15,000 people watch the stream.

When the death toll reached 200,000 in September, the cathedral marked the solemn occasion by ringing its 12-ton bell 200 times—one toll, every six seconds, for every thousand souls who have died.

“The bell would ring and it would echo and resonate out,” says Hollerith. “It was powerful to think in that silence, in that moment in between the next ring, of those thousand souls who have lost their lives. It became a mournful, poignant way for people to stop, take note, and pay attention.”

For Firstenberg, recognition is what makes memorials to the lost healing. “Even in death, we need to be seen,” she says, “because it suggests value—that the person is valued.”

“This is going to be with us for a very long time, even after the immediate crisis finally ends,” says Gwen Dillard, a D.C. local who was visiting Firstenberg’s exhibit for the second time. “We’re going to be permanently changed in some ways by this.” (Researchers are unsure whether pandemic ‘coronababies’ will live with long-term trauma.)

As the pandemic grows, so too does the number of people touched, however tangentially, by the tragedy. Firstenberg’s installation will continue to keep count with more flags, many bearing the names of loved ones written in by visitors. Some include the day the person died and a short biography. Overwhelmingly, the flags seem to say “I miss you.”

Raising awareness and confidence to the US tourists (Project Aegean islands Promo – Mykonos...

15 Stunning Black-sand Beaches Around the World

Visa Agrees with Ministry to Send Digital Nomads to Greece