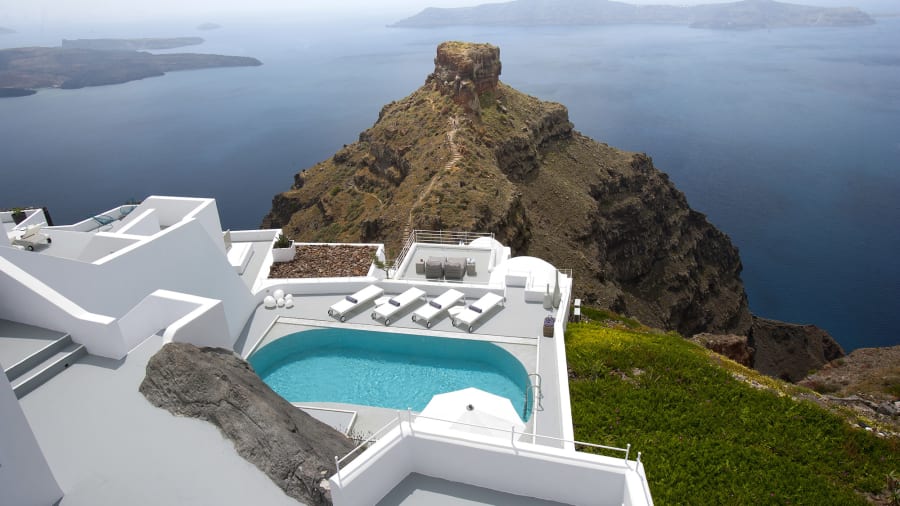 (CNN) — When it comes to what makes a hotel truly spectacular, a cliffside setting is hard to beat. There can be little doubt then that some of the most breathtaking properties in existence happen to be perched dramatically on top of cliffs.Commanding views, whether ocean, mountain or valley, coupled with enviable locales give these hotels endless allure — it’s no wonder they’re among the most coveted travel accommodations in the world.Related contentBeautiful or terrifying? Architect designs hotel suspended over a cliff“Properties on cliffs check the boxes for everything you want in a hotel stay,” says Josh Alexander, an adviser with Protravel, a travel company in New York City. “They’re romantic, private and usually very luxurious. Literally and figuratively, you feel like you’re on top of the world.”These are hotels worth daydreaming about for future trips, even if the pandemic means a stay isn’t in your immediate future.From Dominica and Big Sur to the Amalfi Coast and Santorini, here are some of the world’s most jaw-dropping, awe-inspiring, envy-inducing clifftop hotels:

All-villa boutique resort Secret Bay in Dominica boasts sweeping ocean views from nearly every angle.Courtesy Secret BayIn the unspoiled Caribbean island-nation of Dominica, this all-villa boutique resort is situated atop a high promontory amidst a lush rainforest and faces the sea. All units have kitchens, indoor and outdoor sitting areas and plunge pools.Related contentDominica is open to US tourists; find out what other destinations areThere are ocean views from nearly everywhere on the property, including the open-air restaurant and treehouse-style spa. Guests can enjoy numerous activities on land and by sea — including lionfish hunting, diving in the Champagne Reef and hiking the longest trail in the Caribbean.Secret Bay: Ross Blvd Portsmouth, Dominica; +1 833 916 0833

Perched 1,000 feet above the Maasai Mara, Angama Mara is on the edge of the Great Rift Valley and offers panoramas of the plains that stretch on and on. The camp’s name was inspired by the Swahili word for “suspended in mid-air.”The site also served as a location for the 1985 film “Out of Africa.” Guests can expect top-quality game viewing, including Africa’s Big Five, every month of the year, both on game drives and on walking safaris. Amenities include a photography studio, fitness center, an art gallery, a 40-foot-long swimming pool and a studio where local Maasai women bead bespoke items.Angama Mara: Suswa Mara Triangle, Kenya; +254 730 630630Related contentEight of Kenya’s most beautiful beaches

Formerly a monastery dating back to the 17th century, the family-run Monastero Santa Rosa clings to the side of a cliff overlooking the Tyrrhenian Sea and Gulf of Salerno. With 20 rooms, it has an infinity pool, five tiers of landscaped gardens brimming with bougainvillea trees, a Michelin-starred restaurant and numerous outdoor pavilions.The spa is the best on the Amalfi Coast and features treatments using local herbs and plants while the scenic towns of Amalfi, Positano and Ravello are 20 minutes by car or boat ride.Monastero Santa Rosa Hotel & Spa: Via Roma, 2, 84010 Conca dei Marini SA, Italy; +39 089 832 1199

Grace Hotel is perched above Santorini’s Caldera.Courtesy Grace Hotel SantoriniSituated high on Santorini’s Caldera, in the village of Imerovigli in the island’s northwest, the whitewashed Grace Hotel is an ideal place to enjoy the most captivating Aegean sunrises and sunsets.The property has a Champagne lounge with sea views, a beautiful infinity pool, a high-end Mediterranean restaurant and yoga and Pilates studio. For a splurge, travelers can book the two-bedroom villa, which boasts a spacious outdoor terrace with a private pool as well as a private spa area with heated indoor plunge pool.The hotel is currently closed and planning to reopen in mid-April.Grace Hotel, Auberge Resorts Collection: Imerovigli 847 00, Greece; +30 2286 021300

Reid’s Palace, a Belmond hotel in Madeira, Portugal, has been welcoming guests since 1891.Courtesy BelmondSet on a rocky cliff above Madeira’s Funchal Harbor, Reid’s Palace, a Belmond hotel, is surrounded by ten acres of subtropical gardens and offers expansive views of the Atlantic Ocean from each of its 158 rooms.Related contentMadeira to digital nomads: Come work with usOne of the resort’s three swimming pools is at the base of the cliff and has a sea-level platform so guests can jump straight into the ocean. The Italian restaurant also has sea panoramas and is an especially picturesque spot to savor the island’s sunset.Reid’s Palace is temporarily closed until March 21, 2021.Belmond Reid’s Palace: Estrada Monumental 139, 9000-098 Funchal, Portugal; +351 291 717 171

Located on Ireland’s southeast coast in the fishing village of Ardmore, the appropriately named Cliff House Hotel is at the edge of a bluff that looks upon the expanses of Ardmore Bay and beyond.While temporarily closed due to Covid-19 restrictions, the property will no doubt see pent-up demand for luxurious escapes featuring fresh air and wide-open spaces.The Well by the Sea spa features rooms and a post-treatment relaxation area that seem to float above the bay.The property’s excellent Michelin-starred restaurant serves contemporary Irish cuisine, and the hotel is a great base from which to explore nearby villages as well as the city of Cork, less than an hour’s drive away.Cliff House Hotel: Middle Road, Dysert, Ardmore, Co. Waterford, P36 DK38, Ireland; +353 24 87800

In remote Big Sur, Post Ranch Inn, a favorite hideaway for Hollywood’s who’s who, sits 1,200 feet above the Pacific Ocean.Guests can expect the sight and sound of crashing waves, breathtaking sunsets and a laid-back atmosphere where days are filled with scenic hikes, relaxing by the pool or indulging in a spa treatment (which happens to be in the middle of the woods). Dining at the property’s glass-enclosed Sierra Mar restaurant is an experience akin to floating in the sky.The hotel is accessible by car, but an alternate route is provided to guests coming from Southern California due to recent erosion along Highway 1.

Make your dream vacation in Santorini at Tidus Retreat

The magic of Caldera Yachting

Why cruise ships are setting sail again as COVID-19 rages