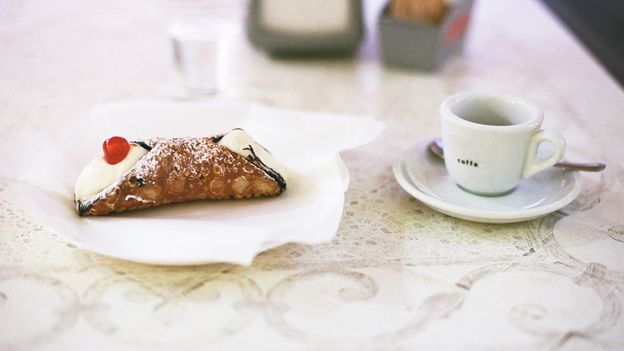 Naples has pizza, Rome has cacio e pepe and Sicily has cannoli. Arguably Italy’s most famous dessert, cannoli are proudly displayed in nearly every Sicilian cafe and pasticceria, honoured on the island’s official website and immortalised by Sicilians in The Godfather with the famous line, “Leave the gun, take the cannoli.”

But if you’ve ever seen a cannolo and thought, “yup, it looks like one,” you’re not alone. The beloved Sicilian sweet does indeed resemble a phallus – and for good reason.

In Ancient Greece, during the Thesmophoria festivities in honour of goddesses Persephone and Demeter, people consumed honey and sesame cakes in the shape of breasts to celebrate fertility and motherhood. The practice, which is thought to have originated in earlier rites held in Ancient Egypt to worship goddess Isis, later spread to the rest to the Mediterranean and to pre-Roman Sicily.

You may also be interested in:
• What you don’t know about panettone
• The surprising origin of burrata
• France’s fight over chocolate pastry

According to Maria Oliveri, an expert in cultural heritage studies from the city of Palermo, sexual organs were not considered taboo in the ancient Greek and Roman worlds but were revered as symbols of abundance. “The sexual shapes of Sicilian desserts derive from that ancient world. Back then, it was important to have many children, as they would cultivate the land and provide for the family,” Oliveri said.

By the 11th Century, the Norman conquerors had converted Sicily to Catholicism, and ancient traditions had mixed with Catholic traditions; winter solstice observations blended into Christmas, and fertility rites merged into Easter. The age-old desserts endured and were preserved by nuns, who made the confections inside their convents for festivals and religious holidays.

The Minne Di Sant’Agata or Minni di Virgini was made to look like a breast in honour of St Agatha (Credit: Marcin Kosciolek/Alamy)

For example, cassata (a round ricotta cake usually decorated with marzipan, nuts and candied fruits), thought to be born during Arab rule to celebrate spring’s renewal, became an Easter (and Passover) specialty. And like cannoli, a number of other age-old Italian desserts with erotic shapes have been passed down through the ages. The Minne Di Sant’Agata or Minni di Virgini (a ricotta-filled half sphere topped with white icing and a candied cherry) was made to look like a breast in honour of St Agatha, a Roman-era martyr whose breasts were cut off for refusing the advances of a man, while the Feddi ru Cancillieri (cream and apricot jam wedged between two almond cookies) was created in jest to resemble the buttocks of a chancellor.

“Nuns didn’t make erotic-shaped desserts, as some people would think, because they were sexually repressed and wanted to have fun, but because they inherited an ancient tradition,” Oliveri said.

Since the time of Ancient Greece, the making and therefore consumption of edible symbols was associated with the ritual of sacrifice, and was thought to bring people closer to the gods. As this notion carried over into Catholicism, nuns were allowed to develop the confectionary despite medieval monastic rules that prohibited gluttony.

Carnival was a time when religious rules were overturned and people we allowed to indulge (Credit: EmmePi Travel/Alamy)

For Carnival – a pre-Lenten celebration rooted in an ancient festival honouring Bacchus, the Roman god of wine and ecstasy (Dionysus in Greek) – the rules were bent further. According to Dario Mangano, a semiologist at Università degli Studi di Palermo who wrote a dissertation on the semiotics of Sicilian desserts, rules sometimes need to be overturned to be reaffirmed – and Carnival allowed for just that.

It was the only time during the year when catholic prudery would leave way for excess and uninhibited self-expression – and was the time to eat cannoli. Men would give the tubular sweet to women to hint at their sexual desires, singing, “Ogni cannolu è scettru d’ ogni Re… lu cannolu è la virga di Mosè,” (Every cannolo is the sceptre of every king… the cannolo is the penis of Moses).

Sadly, most convents that have used the traditional recipes for cannoli (like Abbazia Nova in Palermo) have closed down, and only a handful of older nuns still know how to make them. And while cannoli are now ubiquitous across Italy, the best and most “authentic” ones can arguably only be found in a few Sicilian cafes such as Caffè Sicilia in Noto, Euro Bar in Dattilo and some places in the commune of Piana degli Albanesi.

Today, the most “authentic” cannoli can arguably only be found in a few Sicilian cafes (Credit: Mary Gaudin/Getty Images)

To help save the tradition, Oliveri opened a new pastry shop in 2017 inside the Monastero di Santa Caterina in Palermo called I segreti del chiostro (The secrets of the cloister), where she makes sweets from recipes she found through archival research and from aristocratic families that had acquired them from Sicilian convents. Unlike most shops that use industrially produced cannoli shells, Oliveri makes her own from scratch, preparing the dough, cutting it into circles, wrapping it on tubular moulds and then frying it.

The day we spoke on the phone, she had just finished making 900 of them. According to her, handmade cannoli are tastier than the mass-produced ones because they are fried and sold right away, maintaining their intended crunchiness and flavour.

Corrado Assenza, pastry chef and owner of Caffè Sicilia (and featured on Netflix Chef’s Table), is the heir apparent of modern Sicilian pastry making. While other pastry chefs make several cannoli variants, such as rolling them in pistachio granule or filling them with chocolate-flavoured ricotta, he follows the simpler traditional recipe and fills his shells to order, so they remain crispy.

“Cannoli has become Sicily’s icon,” Assenza said. “And for me it is the manifest of contemporary food culture, in the version we propose at Caffè Sicilia.”

Assenza stresses that great ingredients are fundamental for great cannoli. For example, for more than 20 years, he has used ricotta made by Franzo Spada, a local shepherd and owner of La Pecora Nera dairy, who practices transhumance (an ancient practice of moving sheep to seasonal grazing areas), believing that better foraging leads to better milk, and therefore, better ricotta.

“The ricotta that arrives at the cafe three times a week is a unique heritage,” he said. “Nothing has to disturb [the shell and filling] because you need to leave space to flour, ricotta and the other ingredients, to become a micro masterpiece.”

Over time, most Sicilian cannoli have changed in flavour and ingredients – and have spread worldwide (Credit: ChiccoDodiFC/Getty Images)

Apart from the ones made by traditionalists like Assenza and Oliveri, most Sicilian cannoli have changed in flavour and ingredients over time – due to technological advancement and the influence of other cultures – and have spread around the world. Nowadays, for instance, you can find variations such as multi-flavoured cannoli in New York’s Little Italy or Boston’s North End, and a version with maple and bacon in Sweden.

But despite the departures from the original, the cannolo’s structure – which makes it so hard to eat without creating a mess – has remained the same. “If cannoli is more than 1,000 years old, it’s because it met the taste of every epoch,” Assenza said. “I hope that it will remain a popular sweet that many will buy.”