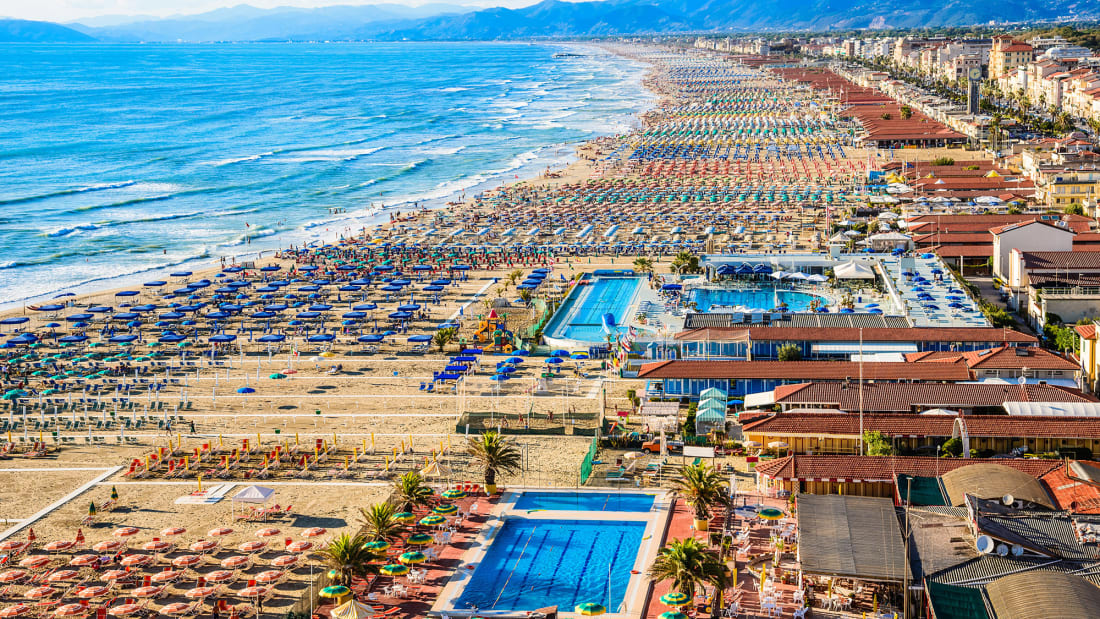 (CNN) — Selfies in front of Botticelli’s Venus. Closeups of David’s manhood. Bottlenecks climbing to the top of the famous Duomo.Back in the halcyon prepandemic times, Florence was struggling with overtourism. And the Uffizi Gallery — one of the most popular museums in the world — was at the center of it all.At its busiest, 12,000 visitors per day passed through, more often than not rushing past the renaissance works of art to snap selfies with the big hitters: Botticelli’s Venus, Michelangelo’s Holy Family, and Titian’s Venus of Urbino.Tales of hours-long queues to enter abounded, and the Uffizi took its place on that unenviable list of places you should really go once in a lifetime, but the experience will likely be so stressful that once you’ve ticked it off, you should move on.What’s more, so many tourists were behaving badly, that the Florentine authorities had to institute a good behavior campaign, Enjoy Respect Florence, with fines of up to €500 ($608) for those caught picnicking outside or sitting on, or graffiti-ing monuments.The pandemic, of course, has made this all a thing of the past. But before travel opens up again, the director of the Uffizi wants to make sure things will not return to the way they were before. One way to make sure of that? Diverting visitors away from Florence itself.Enter the Uffizi Diffusi project. Meaning “scattered Uffizi,” it’s a reimagining of Italy’s “scattered hotel” concept, in which individual “rooms” are located in different houses of a village.In this project, artworks stored in the Uffizi’s deposit will be put on show throughout the surrounding area of Tuscany, turning Italy’s most famous region into one big “scattered” museum.Related contentHow Italy accidentally invented the perfect Covid-era hotelTowns and villages around Tuscany are now nominating buildings that could potentially become exhibition spaces.Uffizi director Eike Schmidt told CNN Travel that the idea had come to him during 2020’s lockdown, and that he’s spent much of the time that the museum has been closed working out potential sites and artwork pairings.The aim? To “create a different type of tourism,” he said, adding that for locals, it will “ground culture in people’s daily lives.””Art can’t survive on big galleries alone,” he added.”We need multiple exhibition spaces all over the region — especially in the places where the art itself was born.

Art is not isolated

The crowds at the Uffizi Galleries for artworks like Botticelli’s “Birth of Venus” were overwhelming pre-pandemic.Klaus Blume/picture alliance/Getty ImagesIt isn’t the first time Schmidt has loaned artworks to local towns. In 2019, he sent a landscape drawing by Leonardo da Vinci to the artist’s hometown of Vinci, in the 500th anniversary year of his death.And he says that a 2019 exhibition on the 15th-century Battle of Anghiari, in eastern Tuscany, held in Anghiari itself, quadrupled the number of visitors for the local museum’s previous record.”The Uffizi is not an isolated museum in the middle of nowhere, but is the culmination of a landscape full of marvel and art and natural beauty,” he said at the time about the Vinci project, calling it a “unique opportunity to see this drawing and then step out into the landscape” depicted in the work of art.

Towns across Tuscany including Lucca are volunteering exhibition spaces.ShutterstockDetails of the new Uffizi Diffusi project are being kept under wraps, but Schmidt is planning “at least 60, maybe even 100 exhibition spaces” across Tuscany, and has hinted that they will include a villa that once belonged to the Medici family in Montelupo Fiorentino, half an hour west of Florence; port city Livorno; belle epoque spa town Montecatini Terme; and Careggi, where another Medici villa sits just east of Florence.Related contentThe Italian town where they eat 500-year-old mealsSince the project was announced, other towns eager to be part of it are offering up properties, including art nouveau coastal town Viareggio (pictured above), Seravezza (where there’s another Medici villa) and Lucca, which is offering its Palazzo Ducale, the town’s seat of power since the 14th century.And it’s not just the exhibition spaces getting a new lease of life. The project is also “an opportunity for some works to be restored,” said Schmidt.

Dispersing the crowds from the Florence honeypot

Turn-of-century spa town Montecatini Terme also wants to be part of the project.Getty ImagesThere’s a serious intent behind the art, however. As Florence braces for the return of mass tourism, Schmidt wants the Uffizi Diffusi project to take the heat off Florence, and is promising works by “household names” to help disperse the crowds.”It’s also important at a local level, creating new jobs and work that will be stable,” he told CNN.And he added that he wants to bring Tuscans face to face with their heritage, too, saying that the current “cultural system is too based on overseas tourism.”Locals often come to the Uffizi, looking for works by artists who came from their villages. But the overall experience might detract from their enjoyment of the single painting they come to see, or it might be in storage, instead of on display.The Uffizi Diffusi aims to send art back to where it first came from, connecting people directly to their heritage.

The Medici villa at Seravezza, one of the locations for the Uffizi Diffusi.Riccardo Ghilardi/Getty Images for Rachel HovnanianAnd don’t worry about losing out if you’re visiting Florence — there’s plenty of art to go around.”We already have over 3,000 works of art on display in the Uffizi — that’s enough,” Schmidt told CNN.”The Uffizi Diffusi will bring to light works of art that currently nobody can see in a calmer, more intimate setting.”The first phase of the project should get underway this summer.

When can we go on a cruise again?

Greece to Eliminate Quarantine Rule for Travelers Ahead of May Reopening