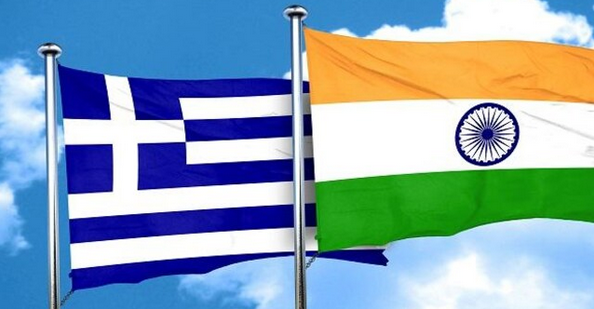 Alexander the Great invaded India in 326 BC. The Greeks invaded South Asia several times later. From the 2nd century BC to the first century AD over 30 Hellenistic (Greek) kings ruled the Indo-Greek kingdom in the northwest and north India. Their historical presence and interactions with Indian civilization greatly enriched Indian culture. The Greeks influenced India, added value to Indian intellect and cultural heritage by introducing industrial techniques, and helped development of astronomy. They built the great school of Gandhara sculpture which influenced the far corners of Asia. Trade with the Indian subcontinent flourished in silk, spices and gold.

Indói: Ancient Greeks understood “India” as the polity situated east of Persia and south of the Himalayas that was much wider. They called the ancient Indians as “Indói” (‘people of the Indus River’) while the Indians referred to the Greeks as “Yonas (Yavanas)”. Herodotus alluded to “Indian land”. India and Greece have nurtured ancient civilizations.

Ancient Greece was one of the dominant civilizations in the Mediterranean and the world for hundreds of years. India also nurtured one of the oldest civilizations in the world. Conflict and competition among city-states led to their defeat in the Battle of Corinth in 146 B.C.E. The Romans, a new and rising world power, conquered, plundered and wrecked Greek cities. Ancient Rome ruled ancient Greece keeping Greek culture intact.

India as the core state of Asia and a global power, and Greece as an essential partner in the Mediterranean Sea and a member of both NATO and the EU, are building on strategic synergies in the new geopolitical environment.

Strategic: India, strategically located in South Asia, dominates the continental landmass of the Indian Peninsula and the Indian Ocean. Its strategic interests extend from the Indian Ocean Region to the Eastern Mediterranean where Greece, a traditionally sea-oriented state, is located.  India seeks control of sea routes to Europe for economic security. A demographic and strategic weight of 1.3 billion people and a dynamic foreign policy has enhanced India’s international salience in recent years. India and Greece seek a strategic partnership.

Women in European Politics – Where is Greece? (infographic)

Greece is a member of both North Atlantic Treaty Organization (NATO) and the European Union (EU). Location in the Eastern Mediterranean Sea has embedded it in the Western security network. Greece wants a vital bridge between Europe, the Eastern Mediterranean states, and the Gulf, with India as its easternmost core. As a dynamic independent sea power in the Mediterranean, Greece is upgrading its military and diplomatic network with allies America, France, Israel and the Arab states. The diplomatic initiatives of this independent actor and EU member are outward-looking. Strategic partnership with Greece— a NATO and EU member—further strengthens India as a valuable partner of Europe in Asia.

A new international order unites three major seas (Mediterranean Sea, Red Sea and Gulf) and three continents (Europe, Asia and Africa). India as a major pole of this network is creating a powerful bloc, extending from Europe and the Mediterranean Sea to the Indian Ocean and the Himalayas.

Katikies Santorini, Katikies Mykonos & Katikies Chromata have been featured in the Condé Nast...

Best in Travel Mykonos – “The Ambassador”

The unique beauty of Oia Suites

ForwardKeys: Greece in top-10 most visited destinations globaly for 2022