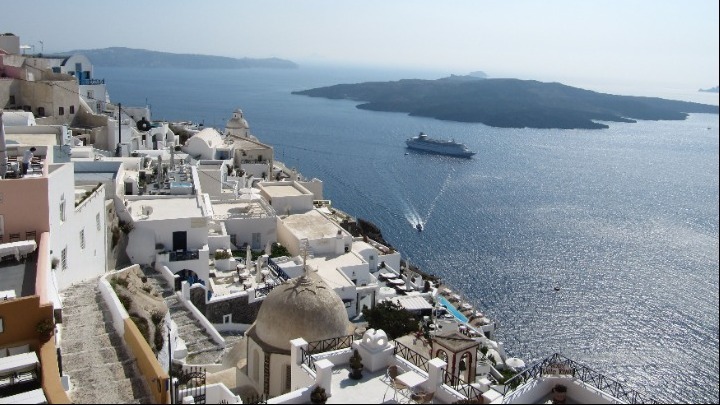 The rate of tourist arrivals on the Cycladic Islands this summer is continuing at a clip, with inflow rates already higher than comparable numbers for 2019, before the coronavirus pandemic curtailed travel, several local mayors report to the Athens-Macedonian News Agency (ANA-MPA) on Sunday.

As they point out, August will raise the numbers even higher, judging by full hotels or annually expected last-minute bookings for August, while some islands report bookings at high capacity through September. Higher accomodation rates are observed not just at key tourism islands like Mykonos and Santorini, but several other islands as well including those in the North Aegean.

Besides high rates of domestic tourism – especially for nearby islands like Andros – foreign travellers hail in the main from the United Kingdom, France, Italy, Germany, and the United States, hotel officials tell ANA-MPA.

Mykonos saw a rise in reservations, Andreas Fiorentinos, says head of niche tourism issues in ruling New Democracy and former head of the island’s hotel owners. Based on current and six-month figures, he notes the island expects a lot of last-minute bookings for August, as usual for the month.

Santorini has reached 100% capacity in reservations for August, according to Mayor Antonis Sigalas, who asserts the figures show an impressive rise over 2019 data. He also expects results from the expanded tourism season further into fall, and from an island strategy to encourage tourists to stay all over the island instead of focusing on towns such as Oia, that make it difficult for local residents. “We are consistently committed to boosting Santorini’s position as a luxury destination and to develop niche tourism,” Sigalas adds.

Naxos is fully booked, Deputy Tourism of Naxos & Small Cyclades Vangelis Katsaras tells ANA-MPA. “Arrivals by ship rose 200% in May compared to 2019, and over 94% in June compared to 2021,” he notes. Most tourists are from France, Italy, Britain, Germany, and the United States, while bookings were at 100% in July and the same for August and part of September.” He adds however that prices have remained at “a logical level” in housing and eating.

Paros has far exceeded reservations in terms of 2019 numbers in June, by 40%, Mayor Markos Koveos says, and has welcomed over 120,000 arrivals by air or sea. It also sustained a good rate of inflows even during the two pandemic years. He expects high inflows to be sustained beyond September.

Similar high returns compared to 2019 are reported by officials on Milos, accessible by air and sea (it had 364 flights in June alone, amounting to 13,208 travellers), Ios (which saw a rise in gastronomy-related touirsm and expects 90% housing capacity in August), Andros (which also sees reservations extended through September, and popular with Greeks also due to its proximity to the mainland), Sifnos (already registering 65% capacity for September, as in June), and Tinos (which is aiming beyond religious tourism domestically through a year-round  tourist promotion that targets higher-income travellers).

Recovering the pre-pandemic rates are also reported by the mayors of northern and eastern Aegan islands Limnos, Samos, Lesvos, Ikaria, and Chios, and sometimes exceeding them, based on figures that span from May to August bookings.

Villa Callidora 5: An Oasis of calm and a perfect sanctuary in Santorini by...