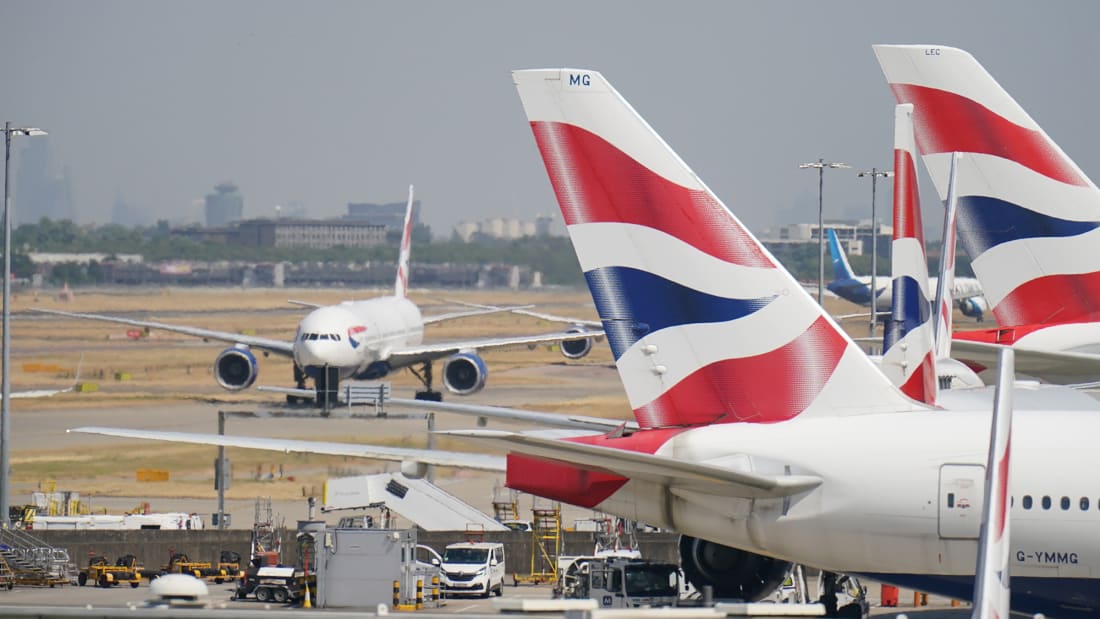 British Airways has announced it plans to cut thousands of flights from its winter schedule because of airport passenger caps and dwindling demand as fall and winter approach.The airline said total capacity for its winter schedule until the end of March 2023 will be reduced by 8%, which will affect roughly 10,000 flights (or about 5,000 round trips).The announcement follows the recent extension of a daily limit of 100,000 passengers currently in place at Heathrow Airport in London.The airport had to impose the cap in July as it struggled to handle staffing shortages, long lines, flight delays and mountains of lost luggage during the summer peak.The cap extension at Heathrow, the largest airport serving the United Kingdom, also affects hundreds of British Airways flights between now and late October.”For us, it means we have to cancel on average a further 12 short-haul round trips from London Heathrow each day,” the airline said in a statement. Through October 29, that’s a total of 629 round trip flights.Affected customers will be offered another flight with British Airways or another airline, the statement said. If that doesn’t work for them, they will be given the option of a refund.

British Airways isn’t the only big carrier cutting back flights in the months to come as the industry copes with supply-and-demand whiplash from the pandemic.For instance, American Airlines is slashing 16% of its schedule — or 31,000 flights — during November alone. The largest cuts will be to flights between Chicago O’Hare and Dallas-Fort Worth, as well as between Boston and Philadelphia. They come on top of smaller cuts to its September and October schedules.Related content3 experts on why fall flying should be smoother than this summer’s bumpy rideKathleen Bangs, a former airline pilot and current spokesperson for flight tracking site FlightAware, recently told CNN Travel these cutbacks months in advance have a silver lining of sorts.They will “hopefully keep delays down and cancellations minimized for everybody if the schedules are pared back a little bit realistically. That’s probably a good thing.””All the airlines tried to go back to 2019 schedules with 2022 staffing,” Bangs said. “And now they’ve seen, ‘OK, that’s not going to work.’ “British Airways planes taxi at Heathrow Airport, London, on July 19. (Jonathan Brady/PA Images/Getty Images)

The Best (and Worst) Times to Visit the Grand Canyon

These New Planes Could Change the Way You Travel

Everyday is a new day at Caldera Yachting