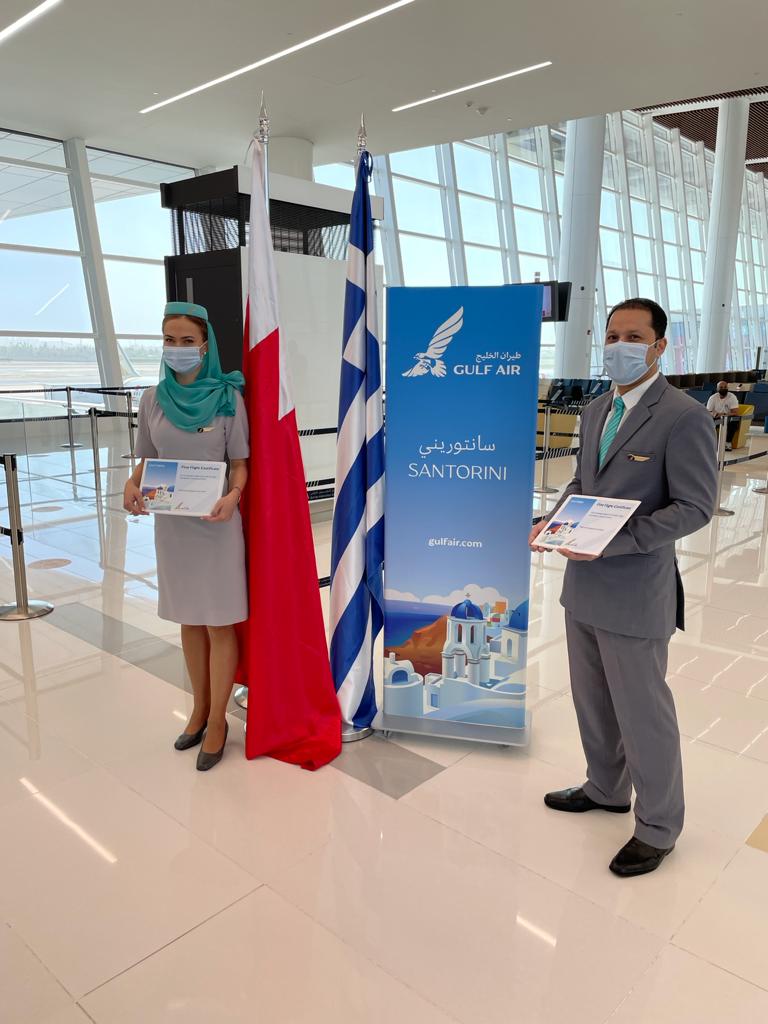 Top Tour Operators from Bahrain and Saudi Arabia arrived on June 16 with the first direct flight in the history of Gulf Air from Bahrain to Santorini, invited by the Ambassador of HACC New York and head of the Mykonos–Santorini–Aegean Islands Promo program, Mr. Konstantinos Skagia.

The top-level executives of the leading travel organizations Almobtaker Travels and Nice Travel had visited Mykonos last year to inspect the destination and in cooperation with the Mykonos-Santorini Aegean Islands Promo program promoted the island through targeted events in Bahrain, Saudi Arabia, and the Gulf region in general.

This year, they chose to experience the unique hospitality of Santorini, for which banner-posting promotion actions have already begun at Bahrain Airport before passengers board the Gulf Air flight.

Remarkably,Gulf Air, a partner of Almobtaker Travels and Nice Travel, decided for the first time in its history to include the island of Santorini, with two direct flights per week till the end of the summer season.

“We are glad about Gulf Air’s decision to include Santorini in its direct flights and we hope that it will be as successful this year as in the years to come. For us, this decision reinforces our actions to promote the Aegean islands in the Arab market. In cooperation with the tour operators of Bahrain and Saudi Arabia, we expect positive results, not only for this year but also in the long term,” said Ambassador of HACC New York and head of the Mykonos-Santorini Aegean Islands Promo project, Mr. Konstantinos Skagia.

WHY WINTER IS THE PERFECT TIME TO VISIT SANTORINI

101 Ways to Have Fun This Summer

EasyJet up strongly to Greece, 2021