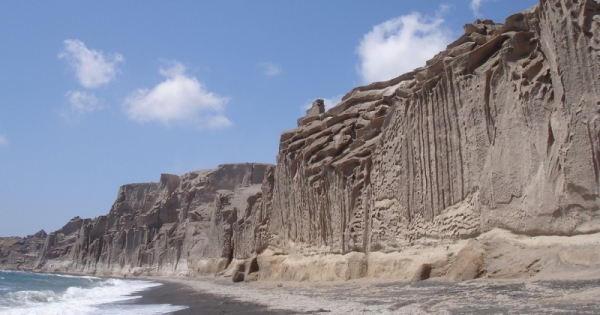 The Piraeus Court of Appeal recently canceled a building permit for an investment in the spectacular beach of Vlychada in Santorini. Previous decisions of the CoE for Paros and Mykonos had preceded.

Justice is putting a “brake” on uncontrolled construction in Aegean islands. A new decision by the Piraeus Court of Appeal cancels a building permit for a hotel investment on the spectacular beach of Vlychada in Santorini. It was preceded by two decisions of the Council of State (CoS) for Paros and Mykonos, which highlight the bearing capacity of the islands as a “key” for the expansion of settlements or the promotion of tourism investment plans and not the pressures of housing development they receive.

n particular, the Administrative Court of Appeal of Piraeus with two decisions (no. A110 and A111 / 2022) accepted the applications for annulment filed by the Hellenic Society of Environment and Culture (ELLET), thus canceling the building permit that had allowed the construction hotel in the area “Lagadia-Megalochori”, overlooking the emblematic beach of Vlychada in Thira (aka Santorini), as well as its revisions.

Vlychada is one of the few pristine areas of Santorini and is characterized by a spectacular landscape with the main element of the impressive geological formations. However, in 2019, the construction of a hotel in the area had begun, in an area outside the limit of 150 meters provided by the Presidential Decree of 2012 as an unstructured zone, from the edge of the cliff. The start of construction had upset the local community, but also the local authorities.

The court annulled the building permit because the site, in which the construction of the buildings was allowed, had no face on a legally existing public road (municipal or community) recognized by an act of a state body responsible for urban planning. The legislation does not allow the issuance of a building permit on an off-plan plot where there is no official recognized road. With the decision of the Piraeus Court of Appeal, the construction of the hotel unit can not continue, however, as some initial works have already progressed, ELLET will monitor the developments until the state paves the way for the restoration of the landscape.

The Vlychada case demonstrated the need for immediate protection of sensitive landscapes with a construction ban, a proposal that becomes particularly relevant in view of the elaboration of the Special Urban Plan (ESP) for Santorini.

Two recent positions of the 5th Department of the Council of State (CoS) concerning Paros and Mykonos are moving in the same direction. With the decision (164/2022) the foreseen extensions of settlements were canceled by the General Urban Plan of Paros, 10 years after its approval. The General Urban Plan of 2012 provided for new expansion of settlements and demarcation of those that had not been demarcated. According to the supreme judges, “the exorbitant number of seasonal residents is insufficiently documented, which is the main reason for the attempted expansion, especially the number of holidaymakers / home users, which shows an increase of 62.5%”.

Also, the CoF with the opinion in the Minutes of elaboration of a for the urban planning of a Complex Tourist Accommodation in Mykonos (PE196-2021) rejected (no. 196/2021) the draft presidential decree with which would be approved Special Development Plan for Strategic Investment in the Ano Mera area of the island. The plan provided for more than double the number of beds allowed in this area, a large part of which falls within a residential control zone. The decision of the CoS is of paramount importance, because for Mykonos (as well as for Thira) the preparation of a Special Urban Plan is expected to begin.

The new case law is considered important for the entire island network of the country as it brings to the fore again the issue of bearing capacity of the islands, emphasizing, as ELLET points out, that the “housing development pressures” aimed at tourism and resort exploitation do not justify the creation of housing extensions, the overthrow of the current planning through special licensing schemes, the lack of road network planning, and finally the need to take into account the bearing capacity of a place and the limits set by natural resources for sustainable development. Elements that should be taken into account in the long-awaited, under publication, Special Spatial Framework for Tourism.

5 of the Katikies hotels have been included in the list of the Top...